This production is not to be confused with the 2001 one,

produced in association with PBS's WGBH-Boston, featuring Alan Bates as (Lord Alconleigh) Uncle Matthew Radlett. However, this later one, like the 1980 production featuring Judi Dench as (Lady Alconleigh) Aunt Sadie Radlett, also melds of the first two novels in Mitford's Fanny-the-Narrator trilogy, The Pursuit of Love (1945) and Love In A Cold Climate (1949).  Two novels, yet a mere 2 1/2 hours!

Since  1980 production runs almost 7 hours, I'm glad this is the production available from Netflix, since the 2001 version is not.  Seven hours just about does the two books seamless justice. Two and half hours could not possibly.

Among the strongest points in this 1980 production is how much screen time we have at the Spanish refugee camp. We see the camp in in all of its misery in a way we did not through Fanny recreating Linda's later descriptions of it, via Mitford-the-author.  That we understand if her husband had been in the least interested in Linda, and not in love with Violet, Linda would have remained in the camp, makes Linda a much more sympathetic figure on screen than she was on Mitford's pages. It's the same when Linda goes to Paris.  We see all those places that Mitford merely writes Linda saw.

Despite the title being Love in a Cold Climate, more time is devoted to the scenes from The Pursuit of Love.

But -- we do have One, Boy, Polly and all the others that were in Cold Climate, and we see enough of them to be satisfied.  It's an excellent production all around, particularly if one admires the books.

The only caveat I have is purely personal: Lucy Gutteridge plays Linda in the same mode Audrey Hepburn would have, if Audrey Hepburn had been young enough in 1980, or wanted to -- all wide eyes that suggest she just waked up, and o so innocent, when anything but.  In the refugee camp Linda's more of a person than a beauty, lord's daughter or Hon, so she's much more sympathetic.  Also, she's working to be useful, whereas before or after Linda does nothing useful to anyone at all, including herself or even her coming child. Now, to make up for saying such mean things about Linda, I will say that the actress thoroughly convinces us that

such a dedicated rake as Fabrice, Duc de Sauveterre, could actually fall in love with Linda, rather than merely dally (though recall nearly the last words of The Pursuit of Love, and in the series too, are the Bolter's response to Linda's declaration that hers and Fabrice's love is for life -- "That what we always think, every time."). 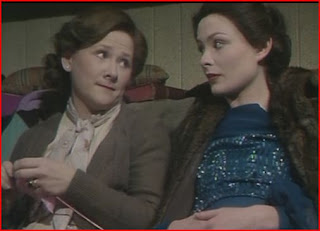 The actress who plays Fanny the Narrator - Radlett Cousin presents a much plainer Fanny than I'd imagined from the books.  But, like everyone else in this cast, she's really good in the role.

As I do when reading the books, part of what I admire intensely is the frequent declarations unabashed, unashamed indifference, and not infrequently, downright dislike, mothers have for their children.  One could hardly dare even suggest that any mother, no matter how wretched the mothering (and / or fathering) might be, might not give a damn about their progeny.  Even Fanny, duly domestic -- at the end of book and series informs us that she prefers Linda's orphaned child to her own children!  The series and The Pursuit of Love Fanny very early makes the point that both Lord and Lady Alconleigh were bemused and somewhat mystified that they'd "filled so many cradles" and were indifferent as to any preparation for their futures.

The same unselfconscious candor is articulated about their class privilege.  As I said earlier *, monsters they were, and they minded not.  They know they are are superior to most of the world and invoke that knowledge at all times.  But somehow it goes down more easily in books about people long dead, than now, when articulated by our contemporary monsters who know they are entitled to make war on the poor.

After re-reading The Pursuit of Love, and watching 7 hours of Love In A Cold Climate, I am feeling somewhat bereft of the monsters. 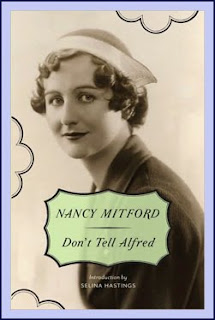 So, I shall proceed to re-reading the third Fanny-the-Narrator, Don't Tell Alfred (1960).

* Recent re-read of The Pursuit of Love, looked at here.
Posted by Foxessa at 3:25 PM