. . . .  I keep forgetting to put up the trailer for the Postmambo Colombia Music Seminar, which is coming right up.

People are so looking forward to this trip, for a multiple of reasons.  As activities are outdoors, the restaurants are open sites, travel within the area will be open to air, and the group is small enough that people can can move --masked -- in separate vehicles -- people feel secure.  The weather is terrific now too.

. . . . It's been non-stop busy here.  Even this weekend of splendid weather -- about to break for the more usual July of 90+ temperature and humidity -- it was a small, local arts community in New Jersey, with its own gorgeous theater, where the organization provided a showing of Tierra Sagrada to its community.  Trying to decide whether to go to Lisbon in the fall, for the annual WOMEX conference, where Tierra Sagrada will be part of the film festival.  Plus there was the 4th of July uptown in our friends courtyard garden, el V's bd at the Metropolitan Museum of Art where we got to view the just opened exhibit, Chroma: Ancient Sculpture in Color.  These were reconstructions of pieces that we've always seen a white and bare of any color at all.  On occasion, the original, as we have it, was shown next to the reconstructed color pieces.  I took this occasion to use the Android's camera for the first time.

The city's exploding with music events, with musicians coming in from Latin America, particularly.  Last night it was Brasil, at Central Park's Summer Stage.  It was the most successful event the series has had so far this summer.

. . . . Non stop anxiety here due to the raging covid numbers, and the fool of a mayor who succeeded the previous fool of a mayor.  All the officials gravely intone -- finally forced to admit that the numbers in the hospitals alone has us in extreme high risk category for infection -- we should maybe consider wearing masks indoors.  We are surrounded by people having to deal with this, while their beloved relatives are in hospital with other conditions and then contract covid from the staff, and they are not allowed, then, to see their relatives.  Which means they can't keep monitoring how their relatives are being treated.  In one case, there is a doctor who insists on giving the patient an epilepsy med.  She doesn't have epilepsy, and it turns her into a zombie -- and thus incapable of protesting anything they do or don't do for her.  Why yes, we just received two new boxes of high quality masks from amazilla.

. . . . Non stop rage and despair on most other fronts.  What fools -- when not just outright evil, which there is no doubt most of them are  -- these jerkwaddies who have counted coup on the country, and what greater fools are us, who have allowed it and done nothing.

. . . . I take consolation from Xenophon's Anabasis -- the March of the 10,000 -- and Tom Holland's Persian Fire: The First World Empire and the Battle for the West (2005 -- so author's filled with 9/11 Clash of Empires interpretation of everything).

Additionally, I have become immersed in the splendid novel, Grand Hotel Europa, from Dutch author, Ilja Leonard Pfeijffer, originally published in Europe in 2018, and translated and published here this last month. The presiding genius of Grand Hotel Europa is Clio, as the lost lover, muse of European history, particularly Italy and Central Europe's. Though not exactly historical fiction, it's difficult to imagine someone who takes historical fiction seriously not being at the very least intrigued by the novel.  It's very long, so I fear its beguiling aspects may begin to pale at a certain point, but if this is the case, I have not yet reached that point.  Michele Hutchisson's translation fulfills the shimmering, yet transparent beauty of the prose, which wins as much admiration as the reader can provide.

. . . . Watching Indian historical epics, during long hot nights, which not only sends me constantly looking at my World Atlas -- such a huge book, it is fortunate the bed is near my screen -- while marveling at the integration of elephants as not only known and usual, but essential elements of the societies in such a variety of ways -- but teaching me about a whole new breed of horse, the curly-eared Marwari warhorse. 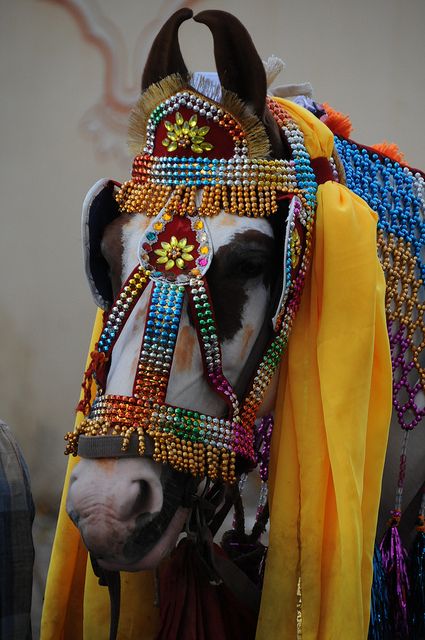 These horses appear to have been bred originally -- perhaps starting in the 13th-4th centuries, post the Mongolian-Turcic conquests of Central Eurasia -- in northwestern India, crossing some Arab stock with 'native' equines and the horses of the Mughuls and the  Khanates.  They became signature horses of the various northern kingdoms such as Jodhpur (Marwar) region of Rajasthan, and by the 17th century then, the horse of the kingdoms of Maratha Empire, which at its zenith covered all of Central India, most of the western seacoast, the Doab, that fertile land between the Ganges and its greatest tributary, the Yamuna.  I think it was the Brits who called it "Hindustan." 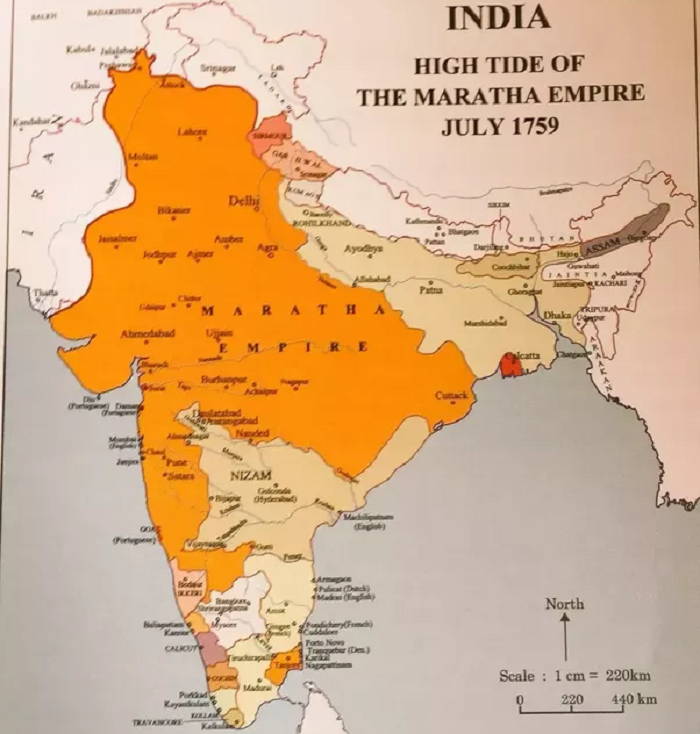 These horses, while large and powerful, thus warhorse, also need far less water and forage than most horses.  This is more than useful for an empire that encompasses extensive desert and rough infertile ground. The mares typically are larger than the stallions.  They have loyal and courageous natures, are said they would not leave their rider even when he was killed in battle.  It is also said that when engaging an army that used war elephants, fake elephant trunks would be fastened to their bridles, which confused the elephants into thinking the horses were baby elephants, allowing the riders to attack the elephant unexpectedly. The favorite coat for the cavalry warhorse is said to have been 'pinto', as we see in the painting above.

So it is again, when all else fails, horses still give me delight.

. . . . Listening via streaming to a Cali, Colombia radio station.  It is all over the music festival Postmambo will be attending, among other activities.  The things we can do these days ....

Got There; Returned Spiritually Energized, To Crash Yet Again

. . . . Got home about 8 PM mid-last week, later than expected, since the transfer flight back to JFK from Havana, got delayed in Fort Lauderdale, while passengers sat enplaned on the runway for an hour.  But otherwise things were fine.

So interesting: in Cuba nobody among the multitudes with whom interaction was inevitable, had even heard of anyone who had covid in the last year +.  It was quite different in the first year and a half, which also had a strict curfew all that time.  By now everybody has been vaccinated, though supposedly their own vaccine isn't as good as 'ours' -- but Cuba wasn't allowed to get 'our' vaccines.  Shoot, the previous made certain Cuba wasn't even allowed to purchase syringes.  Also all interaction was outdoors.  All of it, except the occasional restaurant meal (with very little available -- forget 'choice' -- and in the room to sleep.

Everyone was more than pleasantly surprised -- and so pleased -- to see Tierra Sagrada -- which they, no more than el Vaquero -- had any idea was going to happen out of those spiritual events of January, 2020.

Though things are tougher than one can even begin to imagine there, it was also energizing, despite the determination of every Cuban to get out of dodge however and whenever they can.

. . . . Something else that happened due to Cuba, is that I finally found it impossible not to retire forever and completely from the flip fone universe and enter that of the smart phone.  El V's had his iphone forever -- but it was second hand -- gifted -- in the first place, so he way, way upgraded, despite his dislike of Apple ... but he's had one long enough he's now comfy with it, at least as iphone ios universe.  At the same time he was doing that he got me a Samsung Android, so we both could communicate via whatsapp from Cooba, which is the only way.  Surprising to me, I liked the phone a lot -- intuitive in a way I never could parse the Tablet, which is still sitting here doing nothing for a year.  Maybe I'll give the Tablet another shot.  But ultimately, if I have now gone so far down the constant surveillance and sale of my personal data to have a smart phone, I see no reason for the Tablet, which is a whole lot more awkward to hold and handle than the phone is.  I dunno.

. . . . The 4th we went uptown to mourn the End of Democracy USA and welcome in our SCOTUS 6 Opus Dei  Oligarchy.  It's official.  We are Russia.  Mourning together in company, with delicious food and terrific company, was better than cowering at home.  The young white cadres have made all public life a risk, to put it mildly, whether on the subway, at a theater, in school, a nightclub, a park, in church, a parade, just walking on the sidewalk, sitting on one's stoop.  It's worked so well in tandem with weaponizing covid to keep us all terrified and hiding.  Easy to take over now, right-o.

Best solo reading this last week: Tom Holland's Persian Empire: The First World Empire and the Battle for the West (2005).  It's going so well with our recently completed read aloud to each other Landmark edition of Histories of Herodotus, and the embarkation of the Landmark Xenophon Anabasis. Kind of getting a handle on these eras.  This is when Greece, particularly Athens, was embarking on the new thinking for which it has been lauded ever since, from philosophy, to history, to science, to art, poetry and theater.

Maybe ... it was that of Persia into Greek settlements along Lydia, the islands and even excursion into hinterland, that did this? Along the other hardly to be comprehended Persian conquest of Egypt, seldom occupied by a foreign power, and never held held by one.

Well, in the end, in not many centuries Egypt will be ruled by the Hellenes themselves, in some form, the successors of Alexander -- even if the Athenians considered the Macedonians as much barbarians as the Persians -- and everyone else who wasn't a Hellene. Why yes, in Hellene eyes, the Latins were at least as much barbarians as everyone else. Even if they occupied Greece.

Posted by Foxessa at 5:04 PM No comments: