David Simon: 'There are now two Americas. My country is a horror show'

An edited extract from:


... the creator of The Wire, David Simon, delivered an impromptu speech about the divide between rich and poor in America at the Festival of Dangerous Ideas in Sydney, and how capitalism has lost sight of its social compact.

in the UK Guardian / Observer. It's very strong meat, which will send the usual sorts into frothing vituperation, but hey, Mr. Simon calls 'em as he sees 'em, and he sees via many more perspectives and experiences than the usual frothing vituperators.  For instance, there's this:


You know if you've read Capital or if you've got the Cliff Notes, you know that his imaginings of how classical Marxism – of how his logic would work when applied – kind of devolve into such nonsense as the withering away of the state and platitudes like that. But he was really sharp about what goes wrong when capital wins unequivocally, when it gets everything it asks for.

That may be the ultimate tragedy of capitalism in our time, that it has achieved its dominance without regard to a social compact, without being connected to any other metric for human progress.

We understand profit. In my country we measure things by profit. We listen to the Wall Street analysts. They tell us what we're supposed to do every quarter. The quarterly report is God. Turn to face God. Turn to face Mecca, you know. Did you make your number? Did you not make your number? Do you want your bonus? Do you not want your bonus?
And that notion that capital is the metric, that profit is the metric by which we're going to measure the health of our society is one of the fundamental mistakes of the last 30 years. I would date it in my country to about 1980 exactly, and it has triumphed.

And it's a disaster. 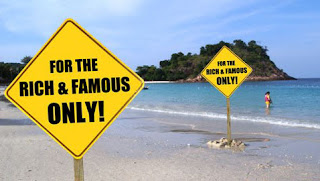 Unless we are among that ever shrinking minority of the global plutocratic oligarchs and their servants,

we are all living Disaster Capitalism now -- combined with the neo-police state of 24/7 surveillance of everyone and everything. Ain't the future grand?