Watching the looting of a city by means other than military conquest -- corporate and legal.  Which means we can see it up close, as it happens in bureaucratic slow motion.

It's the treasures they go for first.

If you are a tiny town without treasures, as with Havre de Grace on the Eastern Shore of Maryland during the Brit blockade of the Chesapeake in the War of 1812 they'll take your baby's cradle and burn your house for good measure.

In Detroit that means the art, which booty is already being quarreled over.

Chicago, it's seizure of the public schools that are the opening battery.  In New Orleans it was the schools, and the hospitals, just like here in NYC, though here we've added the public library system to the list. Real estate is one reason. Teachers and nurses, their unions, i.e. their voting affiliations another. Then there are the pensions, which, as in Detroit, are found often already looted.  In other words, anything that is part of public, community service, pleasure and support is under relentless attack in the war to transfer all such assets everywhere to the private, i.e. corporate-real estate plutocratic oligarchy. 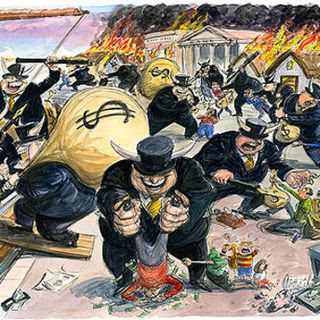 War is crime in a uniform. Is there any American city as representative of the French occupation of the Old Northwest? I think of Detroit as an international river city twinned with Windsor on its opposite bank, in some ways comparable to Brownsville and Matamoros on the Mexican border. Kansas City and St. Louis both straddle the Mississippi, both sides of the river comprising one city in two states. Doesn't seem to happen when the boundary is international, at least not officially.

That's not always the case though.

New Orleans isn't a boundary city, for instance. Nor is Chicago.

Actually, I think Kansas City straddles the Missouri which enters the Mississippi at St. Louis.

I read The World That Made New Orleans four years ago and found it fascinating. It got my attention because I had recently translated a Civil War poem about New Orleans, written in German by the '48er who commanded my Civil War ancestor's regiment. My translation is accessible from the sidebar on my blog.

Didn't know I had a Civil War ancestor until about 2005. Found him on the internet and didn't know for certain until I got his widow's pension application from NARA. I requested records for three soldiers, my ancestor and two soldiers I thought could be his brothers-in-law. Their names were on the widow's pension request which I take as confirmation of my hunch.

The government refused to recognize her marriage on her initial request because it took place in Prussia, but they did send her a bloody shirt. Both her younger brother and her sister's husband had attended the wedding and vouched for her, but she still had to marry her next door neighbor so that he could collect on behalf of her dependents once they became his wards.

The link on my blog sidebar no longer connects. If you Google search the phrase 'Krez poem published' you'll find a post from the Austin Area Translators and Interpreters Association (AATIA blog) at the top of the list. Links to my translations are midway through the comments on that post. The first of those three links is a translated poem called New Orleans, February 1865.

The first page of the Google search I suggested for my own online translations of Krez turned up a couple of recent titles with hits for Konrad Krez.

One is called Traveling Between Worlds: German-American Encounters. It's a collection of seven recent essays in English published by the University of Texas at Arlington. The essay by Andrew P. Yox is called The Fate of Love and it includes a few lines translated from a Krez poem called Courtship. The point the author makes is about German prudishness in the New World. The poem describes the poet's successful courtship of his wife in upstate New York shortly after arriving there in 1851. Krez departed his native Rheinland Pfalz with a bounty on his head. He married the daughter of a German immigrant judge in New York and the couple moved to Wisconsin so he could practice law, something he would not likely have been able to do in New York with an education that included legal study, but probably not enough to call himself a lawyer in New York.

The other title is called The German Pioneer Legacy by Mary Edmund Spanheimer and published by a journal called New German American Studies. The book mentions Krez with reference to his two famous poems, An Mein Vaterland and Die Deutsche Waren Auch Dabei, but deals primarily with the life and times of a German American poet named Heinrich Rattermann, who published a literary magazine in German at the turn of the 20th century called The German American Pioneer. The first edition of Spanheimer's book was published in 1963. A second edition was published in Bern in 2004 and is apparently available in both German and English.

A signifiant body of scholarly work on both Krez and Rattermann is extant in German in Germany, but it's not been generally available in English in the United States until quite recently.

The point I started to make about Detroit is that it seems to me there are potentially NAFTA and globalization issues that apply in Detroit because it is an international boundary and Canada does have a city that is reliant on Detroit's relative prosperity. Much of the auto industry that fled Detroit essentially relocated to Matamoros because of NAFTA and the progress of globalization. It's a basis on which the federal government and the ITO could rationally justify a bailout without incurring an obligation to bail out cities that don't share the particular unique attributes of Detroit or Brownsville as international boundary cities.

Pardon me, WTO, not ITO.