This proposal, by a an early American - Independence era grad student, is going to be very popular in this country, don't you think? 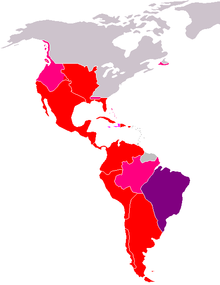 Third—and I expect this might be met with less enthusiasm—make Spanish a required language. Colonial North Americanists have a great deal to gain from our Latin American colleagues, scholars grappling with many of the same issues of colonialism, cross-cultural interaction, imperial governance, and social development. So long as much of their literature remains without translations, Spanish will be necessary to prop open the historiographical window.

He goes further than this:

Bear with me. No one wants to make graduate school, particularly the coursework years, even longer. But if Europeanists, Medievalists, Africanists, Asianists, and Latin Americanists can master languages, so can we. Moreover, increased language skills may not only be advantageous, but necessary to maintain an edge in the current academic climate.

The popularity of global and imperial histories has brought more early modern Europeanists to North American shores. What once may have distinguished a colonial American PhD student from a British imperial PhD student, for example, is suddenly harder to define when they’re both working on New York political culture in the 1730s. And if our Europeanist colleagues have the upper hand in languages, they’re going to have a far easier time reading the non-English historiography, engaging in comparative research, and utilizing non-English-language sources. And the imperial turn pulls us too. Early Americanists are more likely to end up in European archives than graduate students of the couple decades past. Even the most eager reader of French is going to struggle in the Archives nationales if the language ability stops there. (Also: if imperial history is here to stay, at least for the foreseeable future, then so too is comparative or entangled history—making languages all the more valuable.)

Languages are not only for those “out-there” historians, the ones working on non-English spaces like the pays d’en haut, Louisiana, or Spanish Florida. Too often we gloss over the multiplicity of tongues within the British Empire and its colonies. Shouldn’t students working on, say, mid-eighteenth-century Pennsylvania have at least rudimentary German? We need to consider: does language ability (or lack thereof) preordain how we approach a topic? Did some earlier historians previously look to Philadelphia rather than to Lancaster or the western frontier because of language limitations rather than the realities of historical action? Foreign languages allow early Americanists to not only look more carefully at frontier, borderland, and “peripheral” histories, but to gain a more holistic view of the early American experience.

The writer has little hope that his proposals will be adopted.  Has there ever been a country that owns a greater horror and rage at learning another language?