Waiting For the Morning Train: An American Boyhood by Bruce Catton

Waiting For the Morning Train: An American Boyhood, is Mr Civil War Centennial Bruce Catton's memoir.  Written, probably, at the end of the 1960's, as it was published in 1972, when Mr. Catton was six years from his death in 1978, it is firmly grounded in the 19th century, as he was born in 1899. 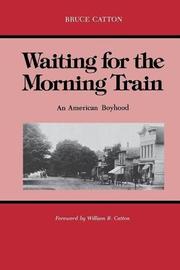 This must explain, at least partly, why these words so resonate with me -- because though born much, much, much later, due to where I was born, I too am at least knee deep in the 19th century:


.... There is a story, probably apochryphal but significant none the less, about a United States Senator who was running for re-election a few years ago.  According to this story, the Senator got to a small north country town one evening to make a campaign speech, and just before he was led into the hall where the speech was to be delivered the local party chairman gave him a briefing about the issues that were on people's minds locally.

"You'll notice, at the back of the hall, quite a few Indians," he said.  "it would be helpful if somewhere in your speech you could say that you are fully aware of their problem and that you will do your best to solve it."

The Senator promised that he would do this.  Then -- moved by simple curiosity -- he asked: "By the way, what is their problem?"

The local man looked at him wide-eyed.

"What's their problem? he repeated.  "God damn it, they're Indians!

Yet the Indian was incidental.  It was the earth and the fullness thereof that mattered. It passed into American hands just as the tools to exploit it were being perfected -- the tools and the driving urge to use them -- and the men who held the tools moved in as if they had to get the job finished before nightfall. They succeeded (at any rate, recognizable nightfall has not come) and in about a century the job was done.  The trees had gone to build homes for half of America, the copper had gone to serve the new age of electricity, and if the iron lasted longer it had been moved south by millions of tons, in a progress as inexorable as the Sleeping Bear's ponderous drift to the eastward, to make railroads and machinery and skyscrapers and weapons; and the land was left bruised and scarred, with the radar domes to indicate that the age of applied technologies advances by geometrical progression.

So we live as the Indians of Lewis Cass's time lived * between cultures, compelled to readjust ourselves to forces that will not wait for us.  There is no twentieth-century culture; the twentieth century is simply a time of transition, and the noise of things collapsing is so loud that we are taking the prodigious step from the nineteenth century to the twenty-first without a moment of calm in which we can see where are going.  Between nineteenth and twenty-first there is a gulf as vast as the one the stone-age Indians had to cross.  What's our problem? We're Indians.

What he says in that last chapter resonates deeply with me on an emotional level. However, this does not obscure that his sympathy for the Indians comes out of his own sense of being out of place in his time.  But unlike Henry Adams, who became mean and bitter about it, Catton chooses to smooth out the edges of his temporal alienation by waving a worn velvet cloak of words that are in the cadences of purple nineteenth century prose, an elegiac confetti that are to signify the author's dignity, courage and honor.  He chooses "the figure of the Indian" as his conveyance for his own sense of displacement, while in truth he's been blessed with every advantage Native Americans have not had for centuries. He can do this because, as he makes clear in preceding pages, the Native Americans of his part of Michigan at least are not now and never have been a threat, so effectively had the tribes been beaten down and degraded by the turn of the 18th into the 19th centuries.  They are no threat to him.

In contrast, as he will get to, mostly by ignoring them as he does in his histories of the Civil War. the "Black Man" is still a threat as the events of the Civil Rights era shows.  This is why, perhaps, Catton was able to ignore the place of African Americans and slavery in great epic of the Civil War?

* That I know who Lewis Cass is, without looking him up, shows how many years I've been studying history.  Woo.
Posted by Foxessa at 3:15 PM