The Civil War, Reconstruction, Race, Reunion, Glorious Lost Cause, Jim Crow and beyond.


The American Slave Coast's subject is the economy and the slave breeding industry, which the War of Southern Rebellion definitively ended. Thus the ways in which the National Conflict per se  enters The American Slave Coast are via self-emancipated who emerged on the scene almost simultaneously with the firing on Fort Sumter, the two emancipation proclamations and the  ways in which the battles, self-emancipation and the proclamations disrupted both the breeding and the trade.  This, though neither were completely ended until the fall

of Richmond -- and even then, the biggest slave trader was trying to get on the train with a coffle of his merchandise to do ... what? and do it ... where?

However, surely, in interviews and q&as after presentations questions that involve any and all of the above will be asked, so one needs to have something, hopefully intelligent and not error-filled, with which to respond.

Ever since some years ago, when I began looking at these matters,  the more I've learned, the more I am amazed by the deliberation and consciousness with which the secessionists constructed the War into the revisionist Lost Cause, and how soon it began -- even before Appomattox -- with direct turn arounds by personages such as Jefferson Davis, suddenly saying the war isn't about slavery, when all along they howled how they would shed every drop of blood to preserve -- and expand, this godly system.

What astonishes me most is how northern and Union historians, journalists, scholars, publishers, and researchers of all sorts -- and politicians! -- went right along with it, all through the north and the west. Many of the secessionists of means moved trans Mississippi and North between 1866 and 1880 -- particularly the wealthy and powerful secessionists. The poor yeoman farmers who bore the brunt of the blood and privation of the rich man's fight, were also too poor to move.

What's equally amazing, is how organized and cooperative the slave power was countering the historical histories and recollections coming from the Union side of the conflict, swiftly founding publications than never before existed, publishing histories, articles, recollections, and even fiction, as well as sentimental, nostalgic, elegies to the faux slave holding south as it never was. They also swiftly created memorabilia collections -- and put up those massive CSA monuments all over the secessionist territory. The reason for my amazement is, because, reading the accounts of the war from the perspective of 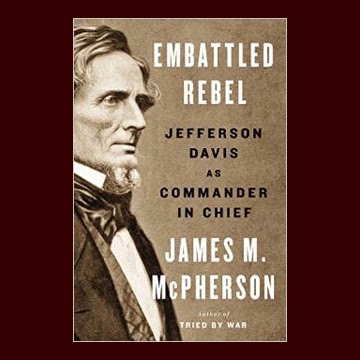 the south, as with McPherson's latest, Embattled Rebel: Jefferson Davis, Commander-in-Chief, it was clear the secessionists weren't able to organize even putting uniforms on their troops, couldn't cooperate in terms of distribution of supplies, or even troops, and hated each other, everyone refusing to take orders or fight for any other state.  The war really should have been over by 1862 -- and likely would have been if the Union hadn't lost the Battle of Fredericksburg, and thereby acquiring huge amounts of everything Lee didn't have, from shoes to food, to ammo and weapons.  But then, it should have been finished by the end of 1863, but Jeff Davis insisted that the CSA would either prevail or burn down the house.

Who financed these journals, papers, historical societies, monument efforts and so on, because somebody had to -- and the south in general was flat broke, and lumbered with debt, without any credit at all.

One answer to that question is Bernard Mannes Baruch -- a son of an immigrant physician to South Carolina, Simon Baruch, who married a southern belle. The family moved north when Bernard was 10. When he became a plutocrat, Bernard Mannes Baruch financed one of the largest southern women's organizations that placed confederate monuments all over the states that seceded. This history of the benefactor of Baruch College is very well concealed -- not even his father's name is named, though it is in a variety of histories that deal with Jewish immigrants in the antebellum and war eras of South Carolina.

I'll be reading these histories for at least a year, as I try to prepare myself to answer questions about how all this got transmuted into the Glorious Lost Cause in which both sides were right and a tragedy of white brother against white brother, about disagreements about tariffs and states rights but not slavery at all o no! but now that we spilled all the blood for nothing we're whole and good, had perfected democracy and were prepared to take our place on the global stage as the best, most exceptional and triumphant of nations in all history.

A David Blight lecture to which I was listening via online, as he speaks of terrible things done to African Americans during the war, Reconstruction and after by southerners, was interrupted by a [i]white[/i] someone -- one of the students in the auditorium? -- shouting, "Professor Blight, stop! Just stop! My people have suffered enough! Leave the South Alone! LET MY PEOPLE GO!"

Blight was audibly -- as well as visibly -- this was a video -- nonplussed. at least 20, maybe more, seconds ticked by. One could hear the held breath by the hundreds in the auditorium. Finally Blight said, "Well, sir, YOU are free to go. So leave."

Then he shuffled some papers, scratched his head, and then said, "Is he gone?' Then, "I hope he didn't have a gun." The students laughed. But that was 2008, and I have a feeling the students at Yale wouldn't be laughing today.

As others had noticed, including Southerners themselves, is what the slave holders were best at, after taking umbrage and vowing punishment, was TALKING, rather than, you know, Doing anything.