The Book of Life - Deborah Harkness Concludes the All Souls Trilogy

Viking will release the conclusion to Deborah Harkness's All Souls Trilogy this summer, July 15, 2014, The Book of Life. 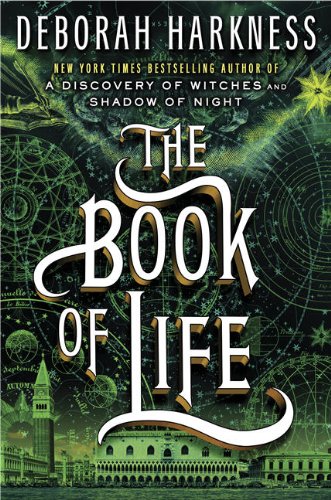 The Book of Life, the conclusion to Harkness's All Souls Trilogy will be available from Viking, July 15, 2014

An exclusive teaser excerpt has been put up online by Lindsay Deutsch.  It is available to be read here.

I am assuming that the book of the title is a physical book, the living properties of which were beginning to be explored by the principal characters, witch Diana Bishop and her vampire husband, Matthew Clairmont, as Shadow of Night concluded.

Like the previous novels' other many readers are doing, more or less patiently, I am greatly looking forward to the publication of The Book of Life. I'm particularly interested in which historical eras they will explore in The Book of Life. As an historian who has also written adult historical fantasy (though sexual attraction, romance and marriage -- and wine -- are very important in Harkness's novels, they are neither Romances nor Young Adult books), the historical geographies and cultures of the books are intensely appealing.

Beyond enjoyment in the historical and adventure aspects, I'm impatient for more of the philosophical and genetic mysteries of time and life that our characters are puzzling over, which for them are literally matters of life and death. Even better, it appears The Book of Life will be the conclusion of all these matters -- the whole story told in three volumes, an actual trilogy, as opposed to an open-ended series.

An extensive post discussing A Discovery of Witches can be read here. (Fair Warning: depending on taste for reading content on screen, this could be classified by those who don't have the taste to do so as TL;DR.)

Neda Ulaby, NPR's reporter on arts, entertainment and culture, did a feature on Shadow of Night in the summer of 2012.  I had the privilege of contributing a few words.  You can hear or read the piece here.

The publications of Harkness, professor of history at the University of Southern California, include two non-fiction studies in the history of science: