In 1803 Thomas Jefferson wrote a letter to William Henry Harrison:

". . .  as the diplomatic crisis leading to the Louisiana Purchase unfolded, Jefferson suggested that if the various Indian nations could be encouraged to purchase goods on credit, they would likely fall into debt, which they could relieve through the sale of lands to the government.3"

So we see the practice of the well-off ensnaring the less rich in a web of indebtedness out of which they cannot extricate themselves other than losing everything they once owned -- even their bodies in many times and places, as in Rome, which demanded people sell themselves and their entire families into slavery to repay the patriarch's loan -- is ancient and well established.

The contemporary Greeks understand this very well.  Over these last days the media has been speaking with Greeks, Greeks who are the average woman in the street sort: small business owners, people who work in restaurants, teach, and so on.  While speaking in English as a second language, these people are articulate and well-informed.  They, their families, friends and communities have been thinking deeply about their condition relative to the EU and their place in it for a long time.

One of their ways of describing what they are subjected to is to compare their situation as a small, poor nation within the Eurozone with that of being Mississippi (the poorest state) in the United States.  To paraphrase generally:

[the United States, a big and powerful single entity includes poor states.  All the states pay taxes to the federal government but the richer ones pay more.  The poorer states receive more benefits in taxes, rather than having everything taxed and taken away from them.  But in the EU, controlled by very a coalition of very rich and powerful nations, with deep ties to the IMF and other international financial interests, the weak and poor are taxed of everything for their own benefit.  We see nothing in return.  it's that the U.S. takes and gives according to need not power that makes it a single nation, in which the people see themselves as citizens of the United States first and citizens of their states second. This allows the system to flourish.  The EU is composed of nations who see themselves first as citizens of their nations and citizens of the EU only as they can benefit from it.  This is not a whole, but a set of conflicting powers, in which the poor are preyed upon by the rich. The rich are not interested in helping the poor but only in exploiting us.  Thus the EU is not a single entity and cannot be, unlike the U.S.]

As things are now in the U.S. and always have been I might takes some issue about the U.S. being a single entity working for the benefit of all.  But I get the point they're making.

One of the primary themes in The American Slave Coast is the division of the colonies, first, during the Constitutional Convention second, and then third in the antebellum era.  The argument, which is not an original one exactly, is that the U.S. could never become a single nation until slavery was taken out.  There were two parallel economies at play all during our history, always in conflict with each other.  A credit, not cash economy, most of the slavery states' wealth was calculated in African American captives -- in whose bodies their credit was calculated.

It was a closed economic system, one in which its wealth could not be used outside itself, i.e. an African American could not be exchanged up north directly for a carriage, but one could do that very thing in the South, including paying one's gambling debts. Thus as a particular form of capitalism, it had to expand or die. It was an enormous drag on the economy and financial systems of the the free soil states, just starting with the stark obstacle that there could be no national system of money. 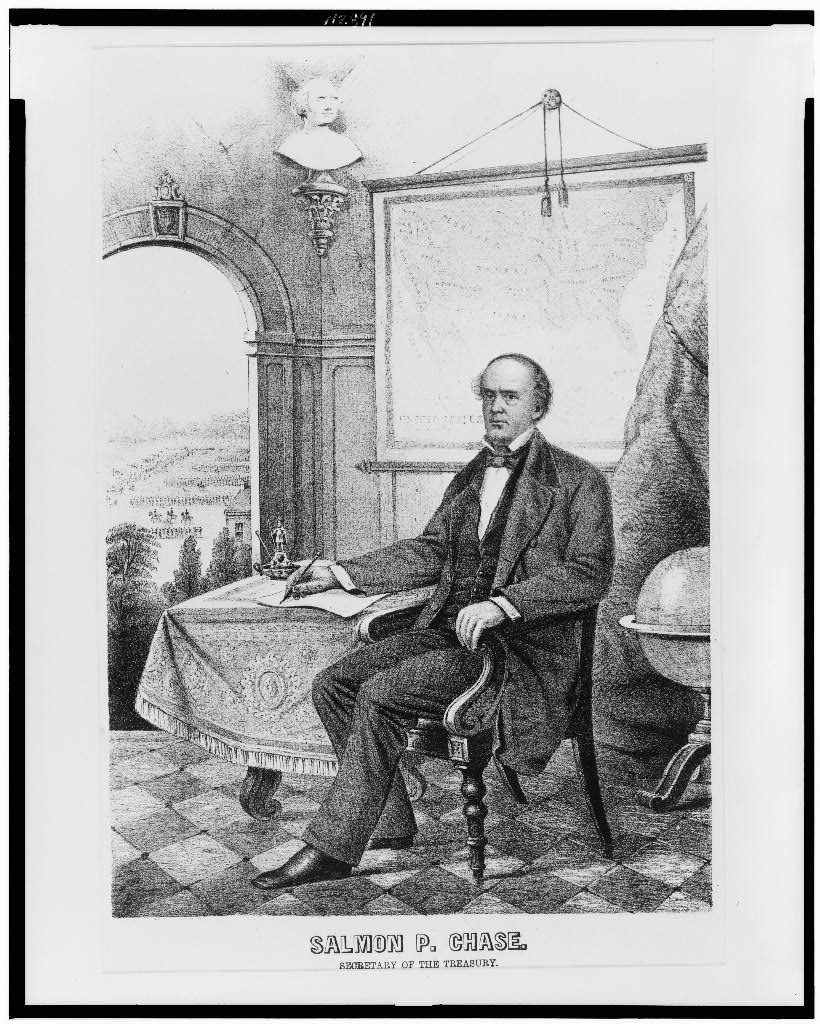 The first thing Lincoln did when Fort Sumter was fired upon -- after calling for volunteers for the army -- was commission Secretary of Treasury, Salmon P. Chase, to create a national currency.  Recall also that Buchanan's southern planter cabinet members and their appointees, as well as the southern senators and representatives stole every bit of specie -- and everything else they could -- from the federal government, even unto an office's petty cash, before decamping to TraitorLandia, where they then competed to become president of the CSA. There was no money at all to run the federal government.

Chase's greenback was the first national currency and it worked.  Even by the end of the war it still retained a bit more than 61% of its value.  We all know what happened with the CSA currency, backed by the wealth contained in the bodies of the captive African Americans . . . .

After the war, the U.S. did have a single currency, and then only was able to become a single nation.* The Greeks understand this, but they feel the EU isn't treating them fairly, which is how the U.S. treats Mississippi.  Recall, Mississippi went from the wealthiest state in the union in 1860, with the largest number of millionaires, to the poorest in 1865.

Will the EU survive?  As we are experiencing yet again in the U.S., we are questioning whether or not we can survive as a single entity, even with our common currency.

* The Southern slaveocracy was anti-paper and banks, as well as anti-city and public improvements, and certainly anti-tax -- and paying fair wages for labor -- and still is, for that matter!

BTW, a former Virginia governor is a blurber for The American Slave Coast!