Lost Girl's season three was darker than earlier seasons.  Season four was much darker than season three. There were no recreational scenes of our friends hanging out and enjoying themselves together, nor, though there was a lame attempt to have a non-arc episode with -- mermaids???? -- that didn't work at all.

Season 3 had managed a few of those before the cliff-hanger ending.

This season, Beau's character as action hero in danger presented problems as the actress, Anna Silk, was so very pregnant that one was always anxious about the baby, as well as distracted by the obviousness of angles and costumes that were intended to distract us from noticing her pregnancy.

However, Lost Girl's costume designers were better than ever throughout this season; 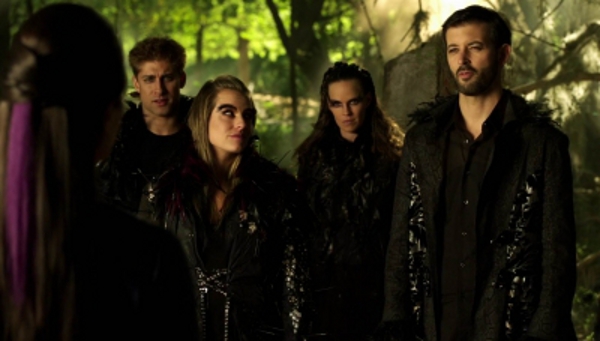 it was the writers who dropped the avian arc imagery and theme that we began with, not wardrobe. This was a particular shame as a major character whose superpower is that of sound is killed before the conclusion (no spoiler).

It seems the writers were as hesitant about the material as the directors might have been in figuring out how to make a pregnant action heroine perform that role. We don't even see Beau in the first episode, which must have thrown them off their writing stride right out the gate, and they never recovered it. They never quite explored anything that they gave us at the start including both the Wanderer and the avian-wing creatures.  We get a glimpse of what it might have been with that spectacular scene in the conclusion of the final episode with Tamsin's wings arising in full Valkyrie glory.

The obviousness of the attempts to divert the watcher from noticing the pregnancies interfered with my suspension of disbelief. I had the same experience attempting to watch Ringer and the last season of Scandal -- both of which I stopped watching about half way in, though for other reasons than the pregnancy of the actresses playing the protagonists. Once Anna Silk was no longer pregnant I had trouble transitioning back to her as Beau, rather than Silk.

One may think season 5 will more than hit the series' sell-by date.

Drinks at The Dal said...

FYI, the correct spellings are Bo (not Beau), Kenzi, The Wanderer, and Buffy.

And Anna Silk was never pregnant while filming. She was barely pregnant at the end of Season 3 and had had her son by the time she came back to film Season 4.

To each their own, but it makes me sad you didn't enjoy the mermaid plotline in "Waves." That's the kind of silly/campy that makes me like Lost Girl.

Hmmm. I thought on Kenzi's gravestone it was Kenzie, but I'll take your word for it, whoever you may be.

As for Bo as as opposed to Beau -- well, her name is Isabeau, so thus I thought it was Beau.

As for other typos -- I've had nothing but ISP and computer trouble for six weeks now, so am always in too big of a hurry. As well, my vision impairment makes proofreading difficult. Just too much in a hurry, and in a state of constant agitation and anxiety.

Thus Lost Girl helped, in=between computer crashes and no internet at all thanx to Time Warner.

But Mermaids sucked, and Kenzi looked a most unattractive toothpick in that red power suit.

As for Bo being hardly pregnant? She was more than noticably pregnant or else I wouldn't have noticed so much, would I?

P.S. Lost Girl already did a mermaids episode, and those mermaids/men were a whole other kettle of fish than these.

I've just discovered Lost Girl and am enjoying it. It's the first new series I've stumbled on in a while that has held my attention. But I'm only at the beginning of Season 2 (via Netflix). Glad to know others are watching it.

That first season was so much fun! A big part of Lost Girl's delight for me, is its diversity -- diversity of all sorts. It is the best bi-sexual depiction I've seen so far in popular culture too.

But most of all, that it refused to take itself seriously in the first seasons, while obviously still giving us all it could, was extra-special.

It was authentic escape watching for me. It's terrific that other people are discovering it.

The Canadians have doing well by television lately: three of my most favorite series are Canadian: Lost Girl, Continuum and Orphan Black.

Looking forward to the second season of that last, with the dvds available soon -- supposedly -- from netflix.