. . . . I had been looking forward to the 6th, final season of Longmire. Foolishly, I expected that this season would correct the errors into which the series had fallen further with each season since the second one. Instead, in many ways, it was a disappointing mess.

The actors did their best, but the writers seemed to be phoning it in.  So many lost opportunities to have a stellar finish, but they went for merely finishing.  However, in the first episode as Walt Longmire pulls his life-long friend Henry Standing Bear from the jaws of death, while not dying of either thirst or snakebite himself, and driving them both to the hospital we have been shown definitively that both these men who undergo tremendous physical abuse in every season, that they and they alone are truly the strongest men in the universe, the realest of real men that the fictional television West still produces now just as it did in the past.

The fall of Longmire began around season 3.  This is due to the writers turning Absaroka County Sheriff's Department's female detective, Victoria (Vic) Moretti, from Philly into the weak pole of the series. They never could figure out – or just didn’t notice – or, worst of all, thought this might grow the series’s viewership among white guys under forty? -- that they didn’t know what to do with her beyond the most cliched usage of female characters reaching back to the beginning of television. This is such a pity, as Vic Moretti, her character, how she behaved in her job as consumate professional, was someone any police force anywhere would want: strong, dependable, so cool under pressure that she didn't take stupid chances, she was a primary draw and foil for her boss, making what by season season two had become a terrific ensemble cast of interesting characters. 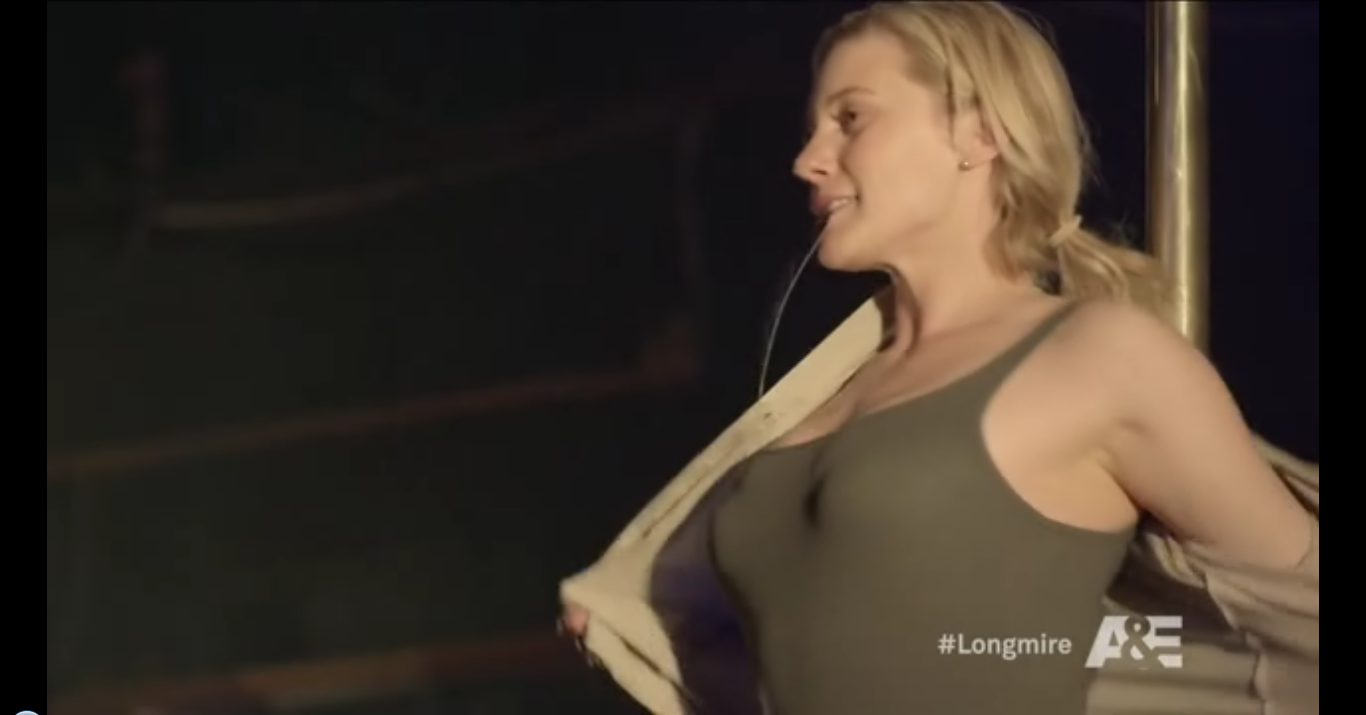 But for reasons only the writers know, they abruptly dropped that Vic for a different one. In exchange for the original Vic we got one who suddenly unbuttoned her shirt two buttons too far, a Vic who pranced about jiggling. They even turned her into honeypot and pole dancer. There's a prolonged scene in this final season where she's supposedly learning to ride a horse. She is shown, under the cooking blaze of southwestern high altitude summer sun, in the middle of the day wearing a clingy, thin,sleeveless, t-shirt, open to her breast bone, trotting -- jiggle jiggle jiggling. Beyond that she is damsel in distress who Walt repeatedly rescues and worries about, one who is kidnapped, raped, tortured, shot,  -- when she began so smart and so strong and competent.   She also gets pregnant, which ultimately means nothing to the story arc, other than she gets shot and loses the baby, which keeps Walt all worked up (we never even learn who the father is) -- that's the only point of having her be pregnant. The only other thing dreamed up for her was the so tired lusting yearning for Walt, her boss, the sheriff of fictional Absaroka County, Wyoming, who is at least 30 years older than she, whose daughter, Cade, is the same age as Vic.  I came to dislike seeing Vic at all.

And get this in the writers' cheap failure with female characters!  In the final episode of the final season, Walter persuades his daughter, who has not a bit of prior experience with law enforcement, who has never showed any interest in law enforcement, who is a practicing lawyer, to run for sheriff of Absoroka County in his place. Now he can conscience-free live with Vic and his finally acquired personal cell phone happily ever after in the idyllic log cabin at the foot of the mountains. Such a shame. It had everything to be much better than this: acting talent, location and photography. Only the writers failed.

. . . I haven't encountered any of the books in the series from which the television Longmire has been adapted.  I have no idea even if any of the characters beyond Walt Longmire are in them. I’m sure if he were still with us, my dad would have had these novels.  He led the way in our household, which was all about Westerns when we kids were all growing up. I read all his books and magazines too, so I’m not ignorant of how Westerns work!  And I’m thinking of Dad, and those days, today, of course, it being Thanksgiving.


I hope Michelle Dockery and the other women (many women characters! which bodes well right there) get treated better by the Godless writers than Longmire’s Katee Sackhoff's Vic Moretti did, and better than the barely named female FBI agent (Jane! her name is generic girl Jane!) played by Elizabeth Olson in Wind River.

I only began to watch Godless yesterday, and so far don't know what to think of it, other than it is beautiful and includes every trope of a classic Western, from the stagecoach, the train, the mine, the ranches, the bad guys(eviLe outlaws, and eastern cheating business guys), the horses (one way we know one of the good guys is a real good guy, is that he's also a horse whisperer, able to tame mustangs by talk and gesture, and never ever abides the mistreatment of a horse), Native Americans, the plucky widow, the whore no longer a whore -- you name it, it's there, even the tropes of High Noon and The Man Who Shot Liberty Valance.  One might think that the cinematographers and director analyzed for years every scene in Days of Heaven. Look at that elongated series of ever widening scope, in which the eviLe outlaws cross on horseback a rushing small river or gully washer.  Those ascending, toppling, falling, expanding fans and curtains of water, each droplet visible, held just that right bit of time hanging motionless in the air. I am among the few who does admire and like very much Days of Heaven, and have never understood why US critics declared it a miserable failure.