The Joy of Jeremy Brett As Sherlock Was Mine!

. . . . . Volume 3 of The Adventures of Sherlock Holmes finally arrived in the casa, the only one I haven't seen in the long-running (1984 - 1994) show. This is the most delicious Sherlock ever, the Jeremy Brett-Sherlock Holmes dramatization from Granada Television.  Cumberbatch and Freeman -- eat your hearts out! 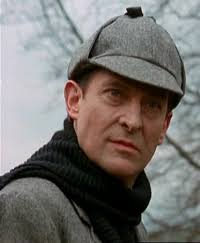 There were two episodes in Volume 3: "The Priory School" and "Wisteria Lodge."  Even despite the bigotry exhibited of the decadent British imperialism toward Spaniards (or anyone who isn't a Brit) so commonly found in Doyle's Holmes fictions, this was undiluted pleasure, to see Brett at work in two of his Holmes that I'd not seen.

The titling for the dvds in the various series over this ten-year period is confusing and contradictory. Nor is there that much information about them on the internet, which seems odd enough to merit a Holmes and Watson investigation.
Posted by Foxessa at 2:43 PM