What To Do When Unrelenting Hot & Humid

Last night, after midnight, it was still 88º.  Excessive Heat Warning still in effect. 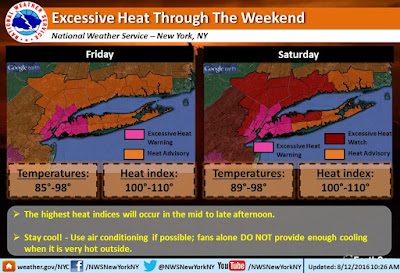 It's been like this for over a week now, with no end in sight.  Thunderstorms forever predicted but they never appear.  We are hunkering in our a/c-ed and floor fanned cave.  If we don't move around too much we're OK.  But outside it just keeps getting hotter as the mid-90's sun keeps heating up even further the cement and pavement and the the high rises belch hot air from their massive cooling systems into the street and the vehicles pour out even more heat.  the humidity is indescribable.

What to do?  Taxes, is one thing we were able to do. Some home improvements. Meeting friends for dinner.  Going out to the freezer that is Subrosa to hear the best latin jazz, which is about the best music going in this era.

As for history -- something I hadn't previously considered encountered my radar, finally, this past week: the relationships among 16th and 17th century protestants and Islam.  Oddly, despite doing so much religious and political history of European powers the 16th and 17th centuries in the variety of our church's study programs, this never came up.

What made me think of this the other day was another of my many duh moments, the recognition of something staring one in the face all one's life: the first siege of Vienna was 1529 -- and by then Martin Luther had substantially contributed to political and military upheaval in many of the Germanic states that chafed equally at the domination of the Austrian Holy Roman Empire and the Pope in the Vatican.

A bit of digging ensued.

But more to the point there were political ramifications to this, from the Balkans across to England, Europe and into Spain.

The Ottoman rulers, such as Suleiman the Magnificent, were in dialog with protestants, as part of various strategies, describing how much more say, protestant Queen Elizabeth had then in common with Islam, than with the Pope and the European rulers who followed Rome.

Later, in the century, at the Battle of Lepanto, there were protestants, particularly from England and the Netherlands, fighting allied with the Muslim sea forces, for instance, against Spain.

However, one doesn't see anywhere, probably for what seem obvious reasons, any western European protestant rulers actually making a common cause with the Turk. Further east though, certain groups and their leaders probably didn't have a lot choice in the matter, if they wanted to survive. But Catholic rulers did make the choice, such as the long-standing Franco-Ottoman Alliance of 1535.

Divide and conquer, make allies and stand strong.  The Ottomans were major players in the European power rivalries of the 15th, 16th and 17th centuries, something we so often forget to factor into our thinking of the events of those centuries. It drove so much of Queen Isabella's policies during and after the conclusion of Spain's reconquista, which she herself accomplished.  The Ottomans had indeed penetrated into southern Italy during her reign.  It was the challenges presented by the Ottomans, the New World and Luther's Reformation that every European monarch had to navigate for a successful reign.  These rulers included, of course, whoever was currently seated in the Vatican's Chair of St. Peter's.


For instance, here is this:


Overall, the military activism of the Ottoman Empire on the southern European front probably was the reason why Lutheranism was able to survive in spite of the opposition of Charles V and reach recognition at the Peace of Augsburg in September 1555:[15] "the consolidation, expansion and legitimization of Lutheranism in Germany by 1555 should be attributed to Ottoman imperialism more than to any other single factor. Currently, disturbingly, one sees the xtreme xtians, including so many politicians such as Ted Cruz, who are engaged in Spiritual Warfare with those inhabiting Satan's belt of the globe, mining Luther's writings for instruction as to how to defeat Islam, which in many places he did declare to be powered by Satan himself.

It is also disturbing that I hadn't thought of any of this myself until this last week.  I should have been connecting these dots all along.