We've gone from New Orleans on Hwy 61, pretty much, with detours, such as to Angola Penitentiary, to Natchez, done a bit on the scenic - historic Natchez Trace Parkway -- along which Andrew Jackson took slaves back with him to Nashville -- and from Nashville led, floated and sold slaves further south.  He has the distinction among the very many U.S. presidents to own slaves to be the only who actually drove a slave coffle.

The Delta proper begins soon after leaving Greenville, home to William Alexander Percy, author of Lanterns on the Levee; Walker Percy was the orphaned son of one of William Alexander Percy's cousins; he took Walker and his siblings in and raised them when their parents were killed / died.  Greenville is all about literature -- and what a fine library the town has too.**

But soon after you leave Greenville, the county seat of Washington County, and cross the Yazoo Bridge you're in the Delta and on your way to Leland, Clarksdale and all world that made the Blues.  This is Guitarlandia too.  The entrance into Clarksdale is a monument of giant guitars, surrounding the cross of Hwy 61 and 49, where supposedly Robert Johnson sold his soul etc.  I'm not going into it here but if you don't know what Robert Johnson really did it's all in Elijah Wald's book, Escaping the Delta (among Elijah's other works is, with Dave Van Ronk, The Mayor of McDougal Street, which sort of inspired the last Coen Bros. film Inside Llewyn Davis. 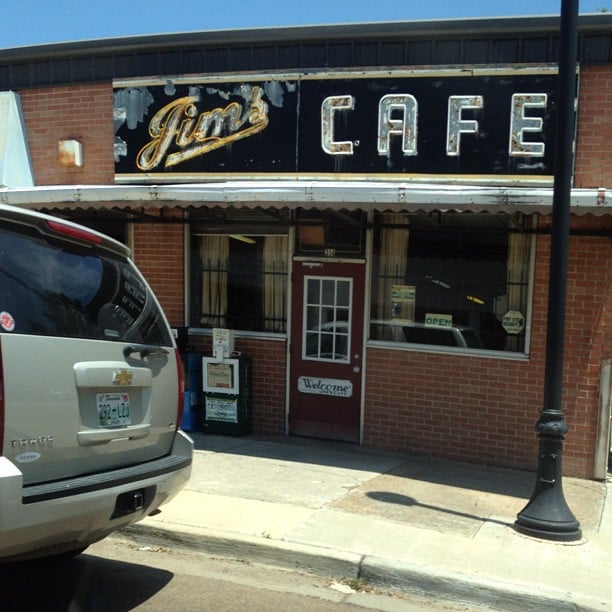 These last few days in the Delta are the setting of the Coens' O Brother Where Art Thou -- we even had lunch in a great cafe in Greenville, Jim's, that happened to be in the film, though we didn't realize it when going there). I was so fascinated by the town's own photographs of the great floods that I nearly missed the films that were filmed here, where the locations shots need no set dressing.

Our sojourn in Guitarlandia ended today in Memphis, with a tour of Sun Records Studio

and lunch on Beale Street in the Rum Boogie, which has some of the artifacts of the lost Stax Records Studio, including the huge red neon Stax sign and guitars, guitars, guitars, hundreds of guitars hanging on the walls, from the ceilings, in cases and not, with the famous names who owned and played them, many of them recorded by Stax.  Then, just up the street from the Beale Street neo Bourbon Street tourist thang, is the Fender Guitar factory ....

This is not all we did these last days by any means, but the theme here is guitars, so that's what this is. El V was deeply moved, even to tears.  Why this would be, read his The Year Before the Flood, the early chapters about growing up in Louisiana and listening to Elvis.  However, others have been even more demonstrative: kissing the x's in the floor of Sun's studio where They stood when making "That's All Right Mama."

Tomorrow Nashville -- home on Saturday.  SO MUCH WORK we are cutting our spring break short by a day.

* The state of Mississippi's Delta is not to be confused with the Mississippi River's delta, which is at least 300 miles further south, in Louisiana.  This Delta region is actually an alluvial flood plain and does not debouch into the River, though the River will overflow the plain on many an occasion.

**   Imagine, a town in which writing of all kinds is considered a legitimate objective for a kid!  Alas, in-between Natchez and Greenville is Vicksburg, where we spend a day and night.  The less said about Vicksburg the better.  It is one of the universe's armpits.
Posted by Foxessa at 11:20 PM