White Christmas (1954) opens at the European war front on Christmas Eve, 1944, with Danny Kaye’s character’s first team-up with the Bing Crosby character, who was already big star-vocalist before the war. They are putting on a show, at which they are expecting to also provide an surprise tribute to their General Waverley, who is being transferred from command of their division.

This opening is a reminder to we later generations the huge footprint WWII made for everyone who lived through it. However, here in the U.S. we would be letting go of World War II very soon, at least as a serious matter in that new media of television. Whereas, in Britain where so many of those who didn 't serve at the front served at home, suffered at worst lost loved ones, homes and livings, and at best serious shortages and deprivations, WWII is still a dramatic matter common in BBC series and other networks. *

From the front, where Corporal Danny Kay rescues Captain Bing Crosby just in time from getting killed by  a bombed building wall's toppling upon him, we move to the 1954 Christmas season in Florida. Kay is now Crosby's partner in show business success piled upon success. Then it's up to Vermont, where via serious story contrivances we manage to have two romance plots running concurrently with the plot to save retired General Waverly's ski lodge, where this year, there is no snow, so no customers.

When watching that opening scene at the WWII European front, I had no idea I’d never before watched this classic.  No wonder, because because my mind merged it with Holiday Inn (1942), which I did watch, finally, 2008, also starring Bing Crosby, running roughly the same story line and Bing singing Ira Berlin's "White Christmas." The significant differences are that this earlier film is in black-and-white,  covers all the annual holidays, not just Christmas, and Bing's side-kick, is played by Fred Astaire as a drunk, with Bing trying to keep Fred and the Girl apart.

Unfortunately both films have minstrel numbers. 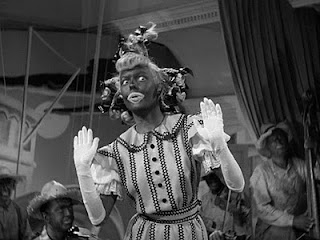 In Holiday Inn the "Abraham" number on Lincoln’s Birthday is further performed in blackface.  We also see the characters 'blacking up.'

Perhaps by 1954 some Hollywood people were more sensitive -- or else this restored and released in 2004 White Christmas as streamed from netflix significantly lightened the blackface. 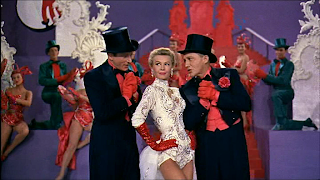 Whether or not the White Christmas minstrel medley -- “I'd Rather See a Minstrel Show"/"Mister Bones"/"Mandy" --  was or was not performed in blackface, all the performance gestures are straight out of the blackface minstrel performance tradition, which is equally jarring to us these days. 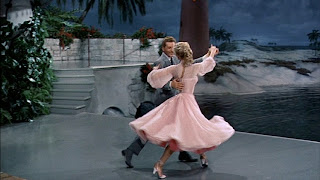 What White Christmas doesn’t get credit for is the quality of the dance numbers with Danny Kay partnered with Vera Ellen.

Haynes Sisters’ (Rosemary Clooney and Vera Ellen) nightclub act, “Me and My Sister.” Vera Ellen may also have the tiniest waist you will ever see – putting Scarlett O’Hara’s 17 inches to shame.

White Christmas is not a great musical or a great film, but it is filled with good will for all, is enjoyable and entertaining, good-natured in a way that Holiday Inn is not.  It's a lovely thing to watch on a cold, snainy (snow and rain together) dark December evening while the house fills with the rich warm aromas of dinner getting made.

** To the great distress at the time, after Kay's death it was publicly revealed he was gay.
Posted by Foxessa at 1:18 PM