Fitzhugh, George, 1806-1881. Slavery advocate. Fitzhugh, from Port Royal, Va., was the descendant of an old southern family that had fallen on hard times. He practiced law and struggled as a small planter but made a reputation with two books, Sociology for the South (1854) and Cannibals All! (1857) which alarmed northerners like Abraham Lincoln and roused southerners to take new and higher ground in defense of slavery.
Fitzhugh insisted that all labor, not merely black, had to be enslaved and that the world must become all slave or all free. He defined "slavery" broadly to include all systems of servile labor. These views had become commonplace in the South by the 1850s. His originality lay in the insight that slavery could only survive and prevail if the capitalist world market were destroyed. He understood that organic social relations and attendant values could not survive in a world dominated by capitalist competition and bourgeois individualism. 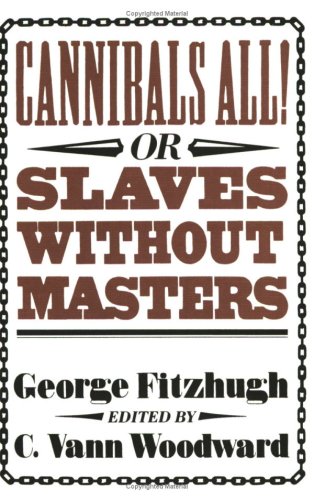 His call for war against the modern world, expressed in a harsh polemical style, made him a solitary figure. Numerous others agreed that free labor spelled class war and invited anarchy. They also agreed that slavery overcame the "social question" by establishing a master class that combined interest with sentiment to offer the masses security. But, having no confidence in his utopian vision of a reversal of history, they generally tried, however illogically, to convince the European and northern bourgeoisie to restore some form of slavery in a corporatist order.
Fitzhugh opposed secession until the last minute, arguing that a slaveholding Confederacy could not survive until the advanced capitalist countries had themselves converted. After the war, which once begun he loyally and enthusiastically supported, Fitzhugh sank into obscurity, becoming increasingly negrophobic and idiosyncratic. To all intents and purposes, he died at Appomattox.

Genovese is one of the classic historians in the study of American slavery as economic institution.  His paternalist economic analysis is fairly outdated now, but there remains so much of value in his work that any historian dealing with slavery must be well acquainted with his work.

I've read as much as I can stomach of Fitzhugh's publications.* Fitzhugh was one of those firebreathers that South Carolina's Low Country elite produced in numbers, who were certain that everything is better with slavery, so much so that slavery should be expanded to include anyone who isn't wealthy, even if they were white. This really scared the North, provoking advocacy for Northern secession as much as the Fugitive Slave Act did.

* Ah swan, that the x right talking point memos have gone to school in the southern radical slave power's proslavery philosophical and economic rationality, logic and history writers.
Posted by Foxessa at 4:42 PM