After Easter Sunday dinner we watched Disney’s Peter Pan, which I’d ordered specially from Netflix to have on Easter. I’d never ever seen it, either on Disney television programs or in a theater. Can you believe it? The season when Disneyland ran serial cuts from their animated films like Peter Pan, Fantasia, Lady and the Tramp and Bambi was during Lent. As Disney tv came on at 6:30 our time on Wednesday nights, we were always leaving the house for church. O, the pain of disappointment I suffered! 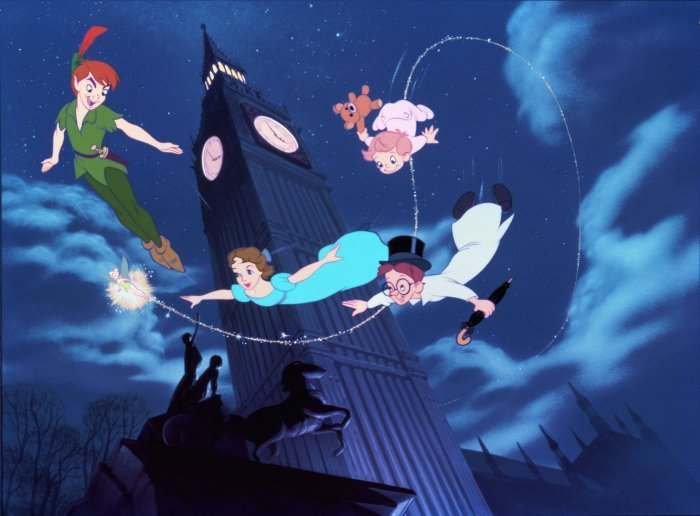 El V had seen Peter Pan, as a young college kid -- marvelously psychedelic, as remembered it.

Woo,  the subtexts in the movie were screamingly obvious to we adults. Were those sexuality jokes as obvious to most parents back then as they were to us? What particularly struck us though, was the jealousy and rivalry of all the female characters to ‘own’ Peter, whether they were mermaids, pixies (in Disney’s version Tink is always a pixie, not a fairy!) Wendy or an Indian princess. It’s so adult, and not even sub-textualized. It is spoken of outrightly by all the male characters. All the female characters are made fun of in some way, with the exception of  Mrs. Darling, and oddly, Tiger Lily, despite the stereotypes of Indians in the film and the book (but then, this is a child's tale of how children's imaginations work).  Even poor Nana gets made fun of. Though she's a dog, she's a female dog-nursemaid.

It was clever of the artists to dress the Lost Boys in the skins of small animals, as a combo of jammies and fur, i.e. a crew of small boys = wild animals.  It was an intermediate stage between the recognizable, pompous, be-spectacled John armed with father's top hat and brollie, barely out of babyhood and Michael with teddy bear and his footie jammies.  The Lost Boys don't even have names in the Disney film. They are clearly of a class below Michael's.  You notice this particularly in the scene where he assumes the leadership of the Boys as Peter's second-in-command on the way to the Indians. Presumably the Boys would know the way as they live in Neverland and have been to the Indians' camp often, but John, who just arrived, is the leader.

There's the all too familiar by now embedded Disney racialism and stereotypes, played for laughs, and as overt as is the condescension to women and the supportive display for the class system.

The art endures. It is enchantment indeed, particularly if you were a child, one would think. But it did for me too.  I was enchanted to recognize much of Neverland's layout to be that of Kensington Park, where, of course, there is a bronze sculpture of Peter Pan in honor of J. M. Barrie.  O my! I thought. And the film begins in Bloomsbury, where I have now been.  So it is questionable that I would have been more enchanted seeing it as a child than I was watching it last night, 60 years after the movie was made. Just enchanted in different ways.