Yet another book about Lawrence of Arabia? This isn't one of those, despite the title. It's T.E. Lawrence within the context of a whole cast of characters in the run-up to, during and after World War One, as the scramble for control of the Middle East by the Powers plays out.  After the war ends, some of these Powers, such as Austria-Hungary and czarist Russia will no longer exist, and a new one, the U.S., will be firmly established on the scene.

Lawrence In Arabia: War, Deceit, Imperial Folly and the Making of the Modern Middle East (2013) by Scott Anderson is well worth reading.  It isn't biography as much as it is a history of the Ottoman Empire's loosening grip upon Egypt, Arabia and the Middle East generally -- and the Powers that were already racing in the nineteen aughts to control the region's oil resources. 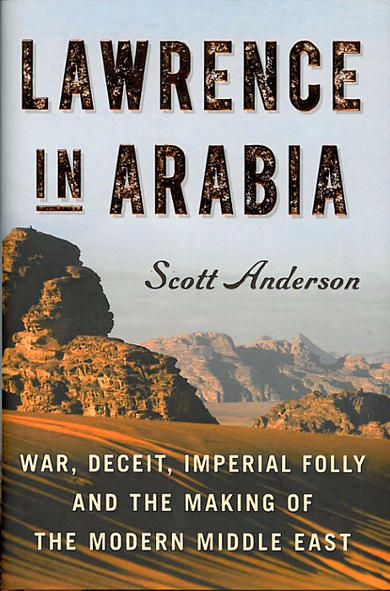 So, as well as the famous figure of T.E. Lawrence, the reader is introduced to a number of other personages. These other significant figures were from  Germany, Russia, Britain, France, the United States and some of the Jewish migrants from Turkish controlled Rumania and czarist Russia, who were attempting to create what would become Israel after the next Great War. Among them are the French and British Lords Rothschild. All of these people, and the interests they represented, schemed with or against the Ottomans, while Istanbul's young Turks dreamed of updating and reforming the Empire, joining the industrial world.


In the meantime all these various sides had vicious intra-conflicts as well. "Betrayal and Lies", as Lawrence learned, was the real name of the game, whether nationalist, corporate, military or Zionist. Tragedies in real life make for a great cast of colorful personalities in a book of history.

The German Arabist Dr Curt Prüfer  (unlike the other figures, there are no photos of him on the web, it seems) is one of the most interesting of these men (for some reason, with the exception of Sarah Aaronsohn, in this history they are all men, these figures loyally working to control the region for their nation or their employer).  A sickly baby and child, a botched operation produced his whispery voice and frail physique, leaving him wide-open to accusations not usually even barely concealed of homosexuality, despite his wife and numerous liaisons with other women.  Nor was he member of the German aristocracy, so rising beyond a certain point in a diplomatic career (also, read for diplomacy, intelligence). was out of the question. However, like Lawrence, he was born with a facility for languages, picking them up quickly and accurately.  As Arabic is a most difficult language to master, he was a valuable player. He ended his life as a nazi ambassador-spy to Brazil during WWII. The American aristocrat in the game was William Yale (yes, a descendant of that Yale), an employee of the Standard Oil Company of New York. He came to the region originally undercover as a wealthy playboy -- which disguise the young Lawrence ferreted out immediately -- to prospect for the same oil that the British coveted,  as they were converting the British navy from coal power to oil. When the U.S. joined the War on the side of Britain he began gathering intelligence for the U.S. Later he became a distinguished history professor.


Born in Romania, Aaron Aaronsohn emigrated to Palestine, toured the U.S. as an agricultural scientist, His dream was not only a Jewish state in Palestine, but one that supported itself by agriculture. His initial botanical station at Athlit, on the Palestine coast, was successful -- and plundered by the Ottoman overlord's military under the guise of requisition. He chose to support the British in the region when war came, even before Turkey entered the war. Aaronsohn died in an airplane crash after he attended the 1919 Peace Conference.

Earlier, his sister and spy collaborator, Sarah, had killed herself, during a brutal Turkish captivity.

Like Lawrence, all of these men and their associates became vital forces in intelligence for their governments and / or allies, helping determine the decisions and the direction of actions during the war and after.

They tended to converge in Cairo. Their descriptions of the thousands of Aussie troops stuck in Cairo after long confinement on ships to get there, waiting transport to Europe, are vivid. The Aussies turned Cairo into a puke-drowned brothel, raping and fighting constantly, dead drunk in the gutters. The British were deeply concerned because, until now, they claimed, the average "arab" had viewed "the white man" as a vastly superior creature.  The Aussies destroyed that image of "the white man" forever.

Scott Anderson is interviewed about his book and Lawrence in this YouTube video.

Among the valuable take-aways, i.e., what I didn't know before reading the book, for me from Lawrence in Arabia, is the role of the oil industry in wrenching the Palestine and the region from Turkey. It also gives a coherent picture of the Young Turks, their goals and how they went about achieving them, to make Turkey a modern country.

The book is lengthy, but it's consistently interesting; though dense with information, it reads easily.