My apologies for not approving comments sooner -- I / we have just been so busy, and we are in another heat wave.  We got Friday and Saturday off from heat waves, but we're in it again today.  And this was a very busy weekend.

The Burr - Hamilton "Debate" was successful. You know it was because every single person there, including the participants, learned something s/he didn't know and / or came to consider something from a different angle -- such as considering Thomas Jefferson as the Founding Father who framed white supremacy.  (That seemed to shock some (white) people, while evidently agreed with by some (African Americans) others.  The friend I was sitting with kept cracking me throughout with his sotto voce remarks.  G, who has a fine collection of African at, whispered at that point, "This is news?"  The facial expression that went with the remark was so funny I had to cover my mouth from laughing out loud. 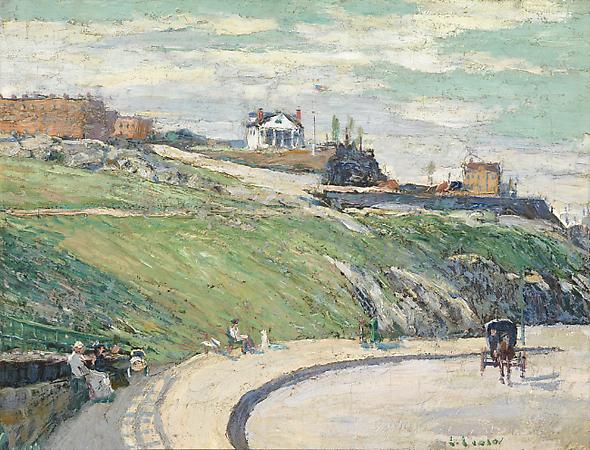 It was a lovely day for such an event. The heat had broken (it's back now, for another blistering, sweltering week), so it was pleasant in the Jumel mansion's music room and great hall, the breezes from the East River and the Hudson wafting through. This was an informed group who had gathered at the Jumel Mansion on this lovely afternoon with people from the neighborhood, early America historians, New York City tour guides, and members of the Hamilton Society and members of the Burr Society, between which there is friendly rivalry. Every anniversary they re-enact the duel at the Heights in Weehawken, New Jersey.

Afterwards we went across the street to K and C's to talk history with like-minded people. Present were two college students from an NYC college, as well as a couple of others who had come with their parents, and were on their way back to their studies in France. Very lovely those children. O, heartbreakingly lovely, so very young. So very talented and intelligent. They speak of their fear that they will never have work or positions that reflect their level of education. They will be stuck in the barista job that pays their rent, while students with the monied background that allows them not to worry about paying rent get to serve the unpaid internships that get them on the track to be hired to do what they are in college to be prepared to do.
Posted by Foxessa at 7:07 PM

My Civil War ancestor's company in the Wisconsin regiment he served was originally recruited by a New Yorker who was commissioned as captain, largely it seems on the strength of the two years of study he completed at Hamilton College in upstate New York. He shared the last name of one of the school's founders and appears to have been born and raised on campus.

Captain Hubbard was court-martialed and dismissed a year after the regiment was activated, I would guess for some form of insubordination. He returned to Wisconsin where he was allowed to continue recruiting for the regiment while serving out his term as state assemblyman, an office he apparently secured through his success as a military recruiter.

Some of the boys on the maternal side of my family were in the first Wisconsin regiment; the same for an Iowa regiment.

I don't know the names though.

My third cousin, twice removed, in Tampa tells me she's six months pregnant. I first heard from her a little more than a year ago when she gave me online access to her family tree. She's descended from another Hubbard, Rebecca, who married a fellow named Chris George, who, a few years after the war, designed and built the 1st Congregational Church of Kenosha, next door to the new Civil War Museum.

I live in Manila, but I'll be visiting my mother-in-law in Milwaukee a few weeks from now, so I'm hoping to pop down to Kenosha for a quick visit to the Civil War Museum. My cousin's Hubbard ancestor was from upstate New York and arrived in Kenosha in 1859, the same year that Samuel Decius Hubbard migrated from New York to Wisconsin.

My cousin contacted me when she realized we have a common ancestor who died in the Civil War. She knew all about her other Civil War ancestor, a Captain Gilbert from the 57th Ohio, but not much about his son who married the granddaughter of our common Civil War ancestor, whose widow was named Dorothea Marie.

I'm betting that when the baby arrives, if it's a girl, her name will be some variant on Dorothea Marie, which now outnumbers the Hepzibahs and Mehitabels in the family tree.

Actually, Samuel Decius Hubbard was elected to the Assembly before he joined the Army (which he did, AS A PRIVATE, after the session was over; terms were only for one year in those days).