Checking In From the Blue Ridge Mountains -- Staunton, VA

Stopped off here to see an old friend* (from Lincoln Ctr.'s sponsorship of Rhys Chattham's hundreds guitars piece, for which El V was one of the diredtors), and visit the Woodrow Wilson Pres. Library. 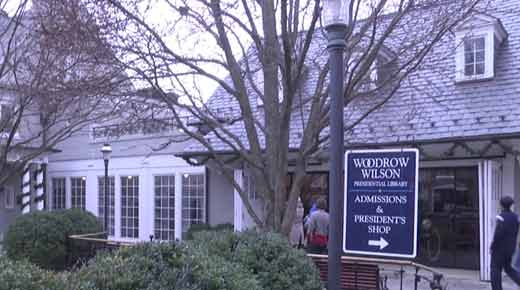 Wilson is the POTUS who officially instituted federal apartheid for any federal work was born here, though early  his life his Slavery rahrahah Secession minister father moved them to Georgia . . . .

So many places and people, so much history, in so few days.

In the meantime, there's this from Publisher's Publicist:

*  This friend, met while he volunteered and spent some weeks in NYC to rehearse the piece (in el Vs section) also creates the acoustic spectrum tracking hardware and software of planets and stars for the great astronomical telescopes such as Hubble. He love music and particularly guitars.  He also repaired el V's dead vacuum tubes for his classic Fender amp.